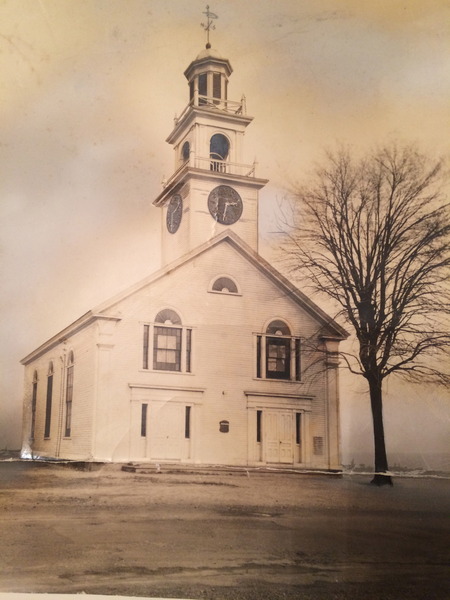 This blessed congregation has been worshipping for more than 375 years.  The original church was made of logs and situated on the Green near the beginning of the Mudnock Road. It was the eighteenth church built in Massachusetts and was built around 1640. A new Meeting House was built in 1723 on the site of the present edifice and was organized according to Congregational polity.

After visits to Salisbury by several Methodist circuit riders, among them Jesse Lee and Francis Asbury, the first Methodist Society in Salisbury was established on June 21, 1811 and a chapel was built on Lafayette Road opposite Forest Road.

In 1833, under the leadership of Rev. John Brodhead there developed a great religious interest. Around this time, at a meeting of the Congregationalists of the East Parish Meeting House, it was voted to unite with the Methodists and form one congregation. It was voted also to pull down the old Meeting House and build a new one. The present church was built in 1834. The Methodists have occupied the Meeting House and provided the ministerial leadership from that day to this.

One of the treasures of the old church, built in 1723, is the old pewter communion set, a gift from Queen Anne of England. This communion set was taken home by one of the members of the church when it was torn down. For many years the set was kept in the Gerrish house in Salisbury Square. It finally ended up at the Essex Institute in Salem, Massachusetts. Another treasure was the communion table which eventually found its way to the Atheneum in Hartford, Connecticut and is considered an excellent and valuable example of the church furniture of the period.

On February 22, 1897, a town clock was installed in the steeple of the Meeting House. The clock was a gift from John T. Brown of Newburyport as a memorial to his wife. Dr. Jacob F. Spalding, popular community minister and physician, was in charge of the program and gave the address at the dedication of the clock.

In 1918, a new pipe organ was installed in the church. Mrs. Florence Pettengill, the organist, headed the drive. The organ was first in the balcony, but in the early 90s was moved to the new extension at the east side of the church behind the pulpit.

In 1962, the basement of the church was built and furnished at a cost of about $18,000.00. The home of Mrs. Frances Pettengill, across the street from the church, was purchased in 1965 for $13,000.00 and for nearly 30 years was used for church school classes. Since 1994 the church has allowed the Pettengill House, Inc., a non-profit social service organization, to use the house rent-free for a food pantry and office space.

As a Parish Church, it has played an important part in the life of the community and the facilities are used by many groups in town.The East Parish Church has had a long and rich history. As our historic church played an important part in the lives of early settlers of Salisbury so we strive to continue to meet the needs of our people in the complex society of today.

-Excerpts taken from a History of the Parish Church written by Mrs. Frances Pettengill